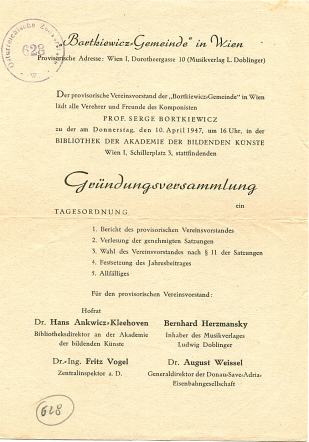 Founding Meeting of the Bortkiewicz Gemeinde in 1947

On the first Monday of each month from November to May, friends of the composer and members of the Bortkiewicz Gemeinde gathered in the Künstlerhaus and listned to concerts of the composer’s music much of which was played by the composer himself. On 15 December 1947 the first major concert evening was given. On the programme were two préludes from opus 33, the piano sonata opus 60, Warum? from Fantasiestücken opus 61, Etude opus 65 no. 2, two études from opus 29, étude opus 15 no. 7 and the Ballade opus 42, which were performed by the composer. The singer Anton Dermota (1910-1989) performed songs from Russischen Lieder opus 47 and from Sternflug des Herzends opus 62.

The violonist Anton Fietz (1927-2010) played the second part Poem from the Violin Concerto opus 22. In a letter from 15 January 1948 to the Dutch pianist and friend Helene Mulholland (1912-2000) Bortkiewicz expressed his enthousiasm about the evening and emphasized that “in spite of the long programme, I had to give four encores.”

The last president of the Bortkiewicz Gemeinde was Edmund Schwab. He was assisted by the Vienese singer Elisabeth Schubert-Tscharré. 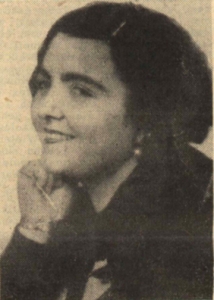 The Bortkiewicz Gemeinde was dissolved on 6 March 1973.